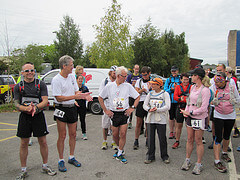 I didn’t realise it at the time but the three days of the Toad Challenge were my 28, 29 and 30th Marathons.  But to start at the beginning I had not been entirely sure that I would be able to take part as my knee had been playing up since the Ridgeway so was really crossing my fingers that all would be well over the weekend.

We were met at the station by Rich and the XNRG minibus, a few of us had spotted other likely candidates and gathered together in one place and were taken to the start area where we collected numbers and instructions.  More importantly it was also a chance to catch up with old friends both runners and the XNRG staff.  I always plan to get there early and think I will have plenty of time but then end up rushing to get ready in time to listen to the race briefing.  It was complicated by needing to have my knee taped up and I managed to get Paul the first aid guy to help with this.

The first day was fairly straightforward and the route really quite easy to follow, although not impossible, to get lost as generally we followed the river crossing from side to side a few times.  I made it to the overnight stop just as the rain started.  Thankfully we were greeted with hot drinks and fresh cakes and were able to get our bedding sorted out for the evening.  This overnight stop was in a very lovely prep school with extremely hot showers.  Once we had eaten and cleaned up we were treated to a talk by Ed and Phil about some really fascinating overseas marathons.

The next day we set out early in a beautiful morning with mist hanging over the Thames.  The weather continued to be fine and we made our way along the river to Marlow.  This day saw a shortish section beyond Goring and Streatley where we move uphill and away from the river.  I really enjoyed this more wooded and undulating section of trail with the ups and downs but we were too soon back to the field gate, field gate field gate pattern.  But eventually we found ourselves in Marlow and running across the field to the Grammar School which would host us for the evening.  It was at this point that the mileage began to take its toll on some people and as I crossed the field there was at least one person with their bag making their way home again.

Another great welcome and good evening meal was followed by an interesting talk about the series of races centred on Chamonix and we listened to Neil’s account of his race.  Lovely but not for me with my fear of heights!

Day three came along with very poor weather reports and we had been prepped to expect rain and wind and more rain!  Following the Ridgeway when I got very wet I had invested in a new waterproof.  Not really a good coat for running but I wasn’t really expecting to run that much or really that quickly on the last day and this was very much the case.  I made it to check point one before the rain started but just as I left it started so I decided to follow Neil’s tip and get my coat on early.  I had bought it oversized to fit over my rucksack and this worked really well.

The final twenty miles was really very much about plodding on and just keeping going! Justin and the other lead runners swept past me on one section of field and looked to light on their feet compared to my soggy plod but slowly the miles slipped by.  My feet were by this time extremely wet but my wonderful socks were coping with it fairly well.  Around this time I fell in time with one of the other ladies and we began a slow but steady trot onwards.  I remember apologising for not being particularly chatting (not me as many of you will know).  But we kept on, as we got to the last checkpoint the marshals noticed what I had failed to, that my companion was really starting to struggle, being very wet and very cold by this point. 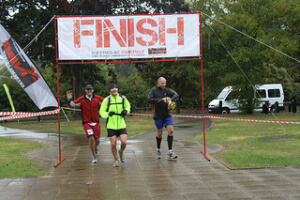 Gosh they swung into action! One marshal donated his dry (and pre-warmed tee shirt), Bob found a better waterproof and flask of tea in his car.  Taz was instructed to change into dry warm stuff and reassured that her treasured and personalised tee-shirt would be taken to the end.  We shared the tea and the marshals checked with me that I would stay with her and keep an eye out for her getting too cold again.

We left the checkpoint and carried on and on!  Finally we could see the flags and the finish line, how lovely to see Brian and Jay there ready to meet us and log our time.  Tee shirts and medals were handed out and hugs exchanged before we gathered our kit and hit the showers.  Bliss was a hot shower and dry clothes followed by coffee and cake.  There was then a chance to consider the challenge and its completion and most importantly the people who had taken part in the weekend, not just the runners but also the marshals and helpers who had such an important role.

Maybe not my favourite route, too many fields and gates for me and bizarrely not really enough hills for me I like the natural breaks that hills give me but the views were amazing and if I win the lottery then I’ve seen the house I’ll buy with the proceeds!  Thanks so much to the XNRG team for their support and care and I can’t wait until the next one.  See you there?