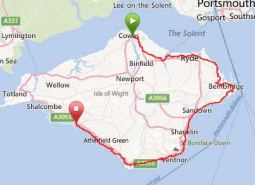 A few months ago I decided to sign up to the "Round the Island Ultra Marathon – 2012" –a run around the Isle of Wight, 69 miles in 2 days – a multiday ultra marathon. I had been motivated by a number of talks & films that had taken place at The Showcase Cinema in Sheffield.

I was tossing up between the Round the Island Ultra as it is known and The Wall Ultramarthon (Carlisle to Newcastle). However the Round the Island was cheaper, more trail better organised from the XNRG guys and sounded more fun. Being persuaded further with fab twitter follower @starterfour10 I found myself signed up one Sunday evening. So that was the beginning of my journey to run around a diamond shaped island for 69 miles over two days. (Garmin maps also available on request). Running Club Member 'Will Beachamp' who ran & won the Frostbite 50 in January which sounded just amazing and also by my friend Dan who ran solo 4 marathons in 4 days all amidst my inability to do speed work and being a bit drained by running 10kms over and over again – boooorrring!. I have slow twitching muscle fibres you know. 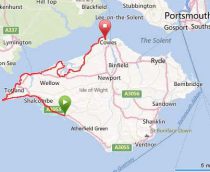 Only those who risk going too far can possibly find out how far one can go
T.S. Eliot

The event was organised by XNRG. The first day being 38 miles, the second being 31 miles. I had never run further than 32 miles before, never mind 38 then another 31 the following day. Insane at its worst, incredibly refreshing at its best? So…

I decided to go for a little run.
Forrest Gump
Next postThe Toad Challenge
View all posts