Pony Express – 3rd Place Lady – shorts a vest and not getting lost ! 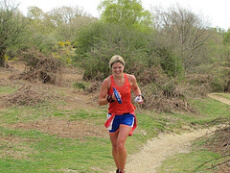 The forecast for once was good… The last event I ran in I ended up wearing 8 layers of clothing and that was in March- so I was very excited about the prospect of running in shorts and vest! I woke up rather disappointed though as it was grey and raining.  The walkers set off from Brockenhurst at 9 in pretty dreary conditions, but by the 10 and 11 O’clock start it had started to warm up and the skies began to clear…

The usual chilled Ultra start began to feel rather like a race as Neil counted down to set us on our way- soon the speedy ones disappeared into the woods and we were treated to a fantastic days running in beautiful countryside.

The route was extremely well marked and even though I clung onto my route guide and map all the way, I didn’t need to use it once as the Xnrg team had done a fantastic job of marking the route at every turn, enabling us to relax and just enjoy the scenery. The route was pretty flat and it was dry underfoot so it was a fast course and there was a varied mix of forest, farmland, shade and sun keeping it interesting and offering British countryside at its best. We obviously encountered a wide variety of horses and ponies and spotted some very shaggy cows, donkeys and a frog! 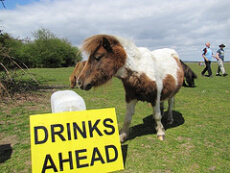 “One of our 4 legged runners takes a well earned rest at a check point!”

The 3 check points were well stocked and the lovely volunteers were full of encouragement and as helpful as ever. The final few miles were slightly more undulating, finishing at a school in Ringwood where we could relax in the sun with tea and cake- how civilised! We managed to get lost finding the local pub, which was actually just around the corner! The perfect setting to chill out before we were treated to a fantastic meal back at the school. This was followed by an extremely inspirational talk by the leading lady Jennifer about her epic run across America, which she made sound rather charming and appealing- you almost forgot it was over 3000 miles!!!

I felt rather smug on my airbed in the hall until the slow puncture let me down, so had a rather hard night’s sleep listening to the hum of snoring and a very active owl! Lights came on pretty early and breakfast was fantastic.

The route on day 2 was varied again, another beautiful days running with fantastic marking. The sunshine brought out a lot of cyclists but apart from that it was a peaceful day in the sunshine along picturesque tracks back to Brockenhurst. We continued the wildlife spotting and took many photos of wild horses and passed through a deer reservation where we were treated to the sight of several deer.

All in all a beautiful circular route, this was my second year doing the Pony and I will definitely be back next year if I can. It is also a very special event for me as it was the first ultra I have completed without going wrong once!