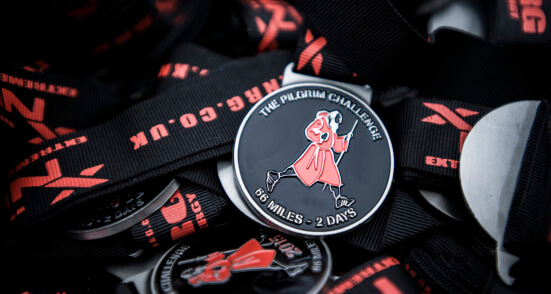 My ultra year is up and running – or, rather, up and plodding. Ultras don’t get any easier, and my first event of 2016 – the Pilgrims, an out-and-back two-day trail based on the Pilgrims Way in Surrey and Kent – is always a toughie. It was the fourth time I’d done it – and it was my slowest. But you know what, after so many months last year when I was sidelined with planta fasciitis, I’m not going to be too hard on myself.

I love the Pilgrims. I love that you’re in the depths of winter and that the hilly terrain, all along the North Downs, is at its most challenging. You’ve never seen mud if you haven’t run the Pilgrims when it’s been raining for weeks on end. And maybe I love it too because it feels a bit like home. I grew up only a few miles from the start in Farnham, and I like to think of the countryside in this part of Surrey as an extension of my back garden.

Not, I think, that this gives me any advantage, and I was definitely a bit anxious going into the event having had such an on-off year in 2015. Memories of finishing the UTMB in 2014 (at my second attempt) faded very quickly, and there were times when I wondered if I would ever be able to run ultras again. I managed a couple of half-marathons in the autumn http://www.ealinghalfmarathon.com/ and https://royalparkshalf.com/ and things picked up after that. The pain in my foot started to recede, helped, I think, by a brilliant little foot-massage tool I acquired called the FootWheel by the makers of The Stick massager. If you’re a planta fasciitis sufferer I would really recommend it.

Rain was in the air when we lined at the start at a Business Park Centre, but Ran wasn’t. That’s Ranulph, by the way – explorer extraordinaire Ranulph Fiennes, who sprinkled his stardust on the Pilgrims last year when he was in training for the Marathon des Sables. That left 200 or so of us ordinary mortals including my friend Elaine who was on the UTMB with me and it’s always nice to see a familiar face.

Day One turned out to be not so wet, plus we had the wind behind us. Apart from briefly getting lost, it went well for me. I clocked seven and a half hours for the 33 miles. My foot held up. Day Two was a lot harder. It had poured with rain overnight and sections of the route were just pure mud. You had to edge round stretches of it holding on to what you could at the side of the path. It took me eight and a half hours, and my total time was an hour and twenty minutes slower than last year. But it was great, and a big shout-out to the organisers Neil and the XNRG Extreme Energy crew.

OK, confession time. In previous Pilgrims between days one and two I’d done what nearly everybody does and camped overnight in the school hall that is the halfway-point HQ, in a village called Merstham, near Reigate. This year I applied to enter a bit late in the day, and it was with mixed feelings that I was told that all the overnight spaces were booked. I’d miss the camaraderie – no, honest! – but on the other hand, there was now the prospect of a hotel bed for the night. Ooh, bliss! Got me comeuppance though – there was a 40th birthday party taking place, and the music went on till 1 o’clock in the morning. I’d have had a better night’s sleep in my sleeping back on the school gym floor.

It really is amazing how ultra running has taken off – something the Independent Magazine picked up on in its recent Health and Fitness Special, which included a terrific piece with our greatest ultra runner, Lizzie Hawker. Lizzie is someone I had the pleasure to meet – and briefly run with – when just before Christmas she held a fund-raising event in London to raise money for the causes she supports in Nepal, where she is now based. Here’s the piece: