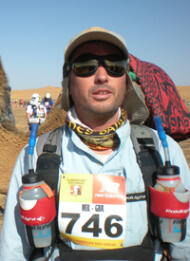 Running 240kms across the SaharaDesert in 40 – 50 degrees of heat carrying all you need to survive on for 7 days is an awesome challenge, but one I fancied taking on. In March 2007 I entered the “allegedly” toughest foot race on earth, the Marathon Des Sables.

Before I started my training I set myself 4 goals.

The first thing I did was set about building my training plan. I knew I needed to do lots of miles, and I knew I would have to train with a pack on my back as much as possible. I needed to get myself ready physically, but also mentally and technically.

Mentally I needed to build some new references and beliefs. I knew I could run marathon distances, what I needed to experience were multiday events and Ultra distances. The main races I entered were:

These events made me realise what I could do, so that when I got to the desert I would have confidence in my physical and mental strength.

Technically I prepared by trying every bit of kit I was planning to take. Given that you have to carry everything and given that it is a harsh environment to compete in I wanted to make sure everything worked. For instance I bought one type of rucksack and after 2 months of training with 10kg in it, it fell apart !! I also wanted to check all the food out and make sure I was getting maximum calorie benefit per gram.

Training for the heat in the UK is challenging, but I did find a way. I found a heat chamber in Silverstone which is used by Porsche to prepare their drivers for extreme temperatures. Basically it is a cupboard with a running machine that has the temperature raised to 47 degrees and 12% humidity. I did this a couple of times, it was really really hard, but by raising your body temperature regularly it reduces the stress.

So I went to the desert mentally, physically and technically prepared. What I hadn’t prepared for was what we got when we arrived…………..rain, and lots of it.

A Freak Of Nature

Within the first 2 days of arriving Morocco had its annual rain fall. Rivers appeared from no where, cars were washed away, roads were washed away and generally the whole place turned into a muddy, boggy mess.

We arrived at our first night bivvy in torrential rain. the buses we were travelling in could not get to the site because of the weather so we had to get on board several Moroccan Army trucks. Once we were there we realised it was not going to be a fun evening. The bivvys are open ended canvas shelters designed to keep the sun off not the rain. The ground was very muddy and quickly becoming worse. After about an hour of trying to make the tents liveable we decided to head for the press tents which were much dryer and more sturdy.

We were then sent to the “mess” tent for an evening meal. Which was very good and included wine !! As the rain continued and the ground got wetter the organisers decided that we had to evacuate the site, so we were transported by trucks to a hotel in a local town.

Of course out of 850 competitors only 100 Brits actually made it to the camp site for the first evening the rest headed to hotels. The site ended up in 2 foot of water, because it was built on an ancient river bed !!

Next day we found out that the first stage of the race had been cancelled due to the weather !!

After 2 years of preparation and training this was a massive disappointment. I felt upset, angry, robbed, I was now going to take part in a shortened MDS, not what I wanted. There were a lot of unhappy people out there. However, I realised that I could not control or effect the weather, what I could do was focus on what I could control which was how I felt and being ready when we go the go ahead. I also reminded myself that it was a race and the situation was the same for everyone.

The Race Starts At Last

So after 2 unexpected nights in hotels we headed out to the start of Stage 2. The sun was out it was getting hot, the camera crews were everywhere, so it finally felt real. Standing at the start I was excited, nervous, apprehensive, but really looking forward to getting underway.

The first day took us into the famous Saharan Dunes.

The terrain in the Sahara is amazing, beautiful and brutal all at the sametime. It is a mixture of the classic huge sand dunes that you see in the movies, sandy / muddy river beds, vast expanses of ancient sea beds covered in rocks and fossils and large rocky climbs. All really tough to run on.

The key to surviving and competing is to have a good routine and strategy. Mine was to run for 25 mins, walk for 5 mins. (Walking at 4 miles per hour, so a good pace, but a change in use of muscle groups). I also had a drinking and feeding routine. Everytime I walked I had some food, either a piece of energy bar, some sports beans or a pepparami. I also took a salt tablet every 30 mins.

With regard to water I found that I was getting through a litre between checkpoints, 500ml of water, 500 ml of electrolyte drink.

When I reached a checkpoint my strategy was simple. Whilst most people stopped, washed their feet, changed their socks, or sat down and had a rest. I decided to make as many places as possible by going straight through. I loaded up my water bottles, drank as much of the rest of the 1.5 litre bottle as I could and then threw it away. At each checkpoint I probably gained a minimum of 20 places.

The first 2 days I felt great as we covered the terrain and I got into my routine. We covered roughly 20 and 22 mile respectively, and I ended up 146th so was very pleased.

The routine when we got back to the bivvy site was to got on some food, wash and disinfect the feet, sort out any blisters and then rest out of the sun.

Day 3 was the long day and because of the cancellation of the first day the organisers decided to make it a mammoth day, bigger than they had ever orgainsed before – 91kms !

On the long day I had my hardest challenge. After about 4 or 5 hours I was losing motivation and momentum running into a strong, hot, sandy wind through a never ending wadi. Luckily I met up with a friend and we ploughed on through the day. Several other people joined us and by night fall there were about 6 of us. With about 20 kms to go I started feeling really ill, feint, and dizzy. I had to really dig deep to push myself to keep up with the others. I was determined not to stop and not to drop back from the main group. When I got to the final check point 14 kms from the finish a doctor tried to pull me out, but I persuaded him I was fine after taking on some water and sugar, so we pushed on. We crossed the line in 14 hours 10 mins, in 112th place. I found my tent, got my sleeping bag out and collapsed. Definitely the hardest thing I have ever had to do (so far).

Some of the people in my tent took 30 hours to complete the stage. One of them had totally shredded his feet, they looked like he had trodden on a land mine. Another one who had a really bad stomach upset before the long day, had to be put on 5 intravenous drips to stop him going into a coma. This was 14kms into the race. After 3 hours there he got up, told the doctors he was leaving and walked the remaining 77kms !! Outstanding !!

The determination and spirit of all the competitors was unbelievable. I saw 2 70 year olds cross the line of the long day in 34 hours ! I saw a brit whose feet were in bits complete the final marathon stage on crutches !! Amazing.

The determination and spirit of everyone left me in awe.

Following the long day, I had a rest day while the other runners / walkers came in, and then the final day was a 42.2km marathon distance. It was a very hot day, tough terrain and everyone pushed hard. I kept my head and tried to stick to my strategy so that I got to the finish. As we crested a huge rough hill we could see the finish 3 kms away. This was a wonderful site and spurred me onto to have a really fast finish.

Looking back at my goals. I achieved 3.5 of them.

The final evening the man whose vision created the Marathon Des Sables 24 years ago arranged for the Paris Philharmonic Orchestra and an opera diva to perform a concert for us in our Bivvy site. It was surreal. 850 smelly dirty runners lying in their sleeping bags on the desert floor listening and watching an orchestra and opera singer perform in their dinner jackets and posh frocks. Unbelievable !!

My summary of the event would be that the running was as tough as I expected, living in the desert was tougher. It is a brutal, dirty, hot, environment and many of the runners became ill because of the bacteria that is everywhere. The terrain and the views are wonderful, it is a stunning remote environment.

I would recommend this outstanding event to anyone who fancies pushing themselves outside of their comfort zone and doing something exceptional.