Secondary school teacher and Extreme Energy athlete, Nathan Montague from Wiltshire, is preparing for an attempt to become the first Briton to win the gruelling Kalahari Augrabies Extreme Marathon (KAEM) in South Africa this week.

Starting on 24 October to Friday, 30 October, the KAEM sees runners covering 250 kilometres in seven days in the Northern Cape’s “Green Kalahari”. Taking place across six stages, ranging in distance from 28km to 82km, the KAEM is a self-sufficient race, meaning Nathan will have to carry all his supplies, clothes and compulsory safety/survival equipment for the duration of the event. This is on top of coping with the extreme temperatures of the region, which can vary from mid-40 degrees Celsius during the day to single figures in the evenings.

Since entering the event early this year, Nathan has been focussing his training on making history at KAEM. Following an injury in August that saw him withdraw at the eleventh hour from the Ultra Trail du Mont Blanc, he has been using every opportunity to prepare for KAEM. This means squeezing in training around a busy teaching schedule, whilst making time for his two young girls.

“I get up early in the morning to train and run again in my lunch breaks, aiming for 100 miles/week, 140-160 miles/week in big training weeks. Making time to rest is the hardest part! My training has to fit in with my work and family life, so I use any opportunity I can for stretching, even if it means squeezing in a stretch or two in the school yard!”

Nathan’s commitment to winning the race has seen him training on family holidays, setting up a ‘heat room’ with a treadmill in his house to acclimatise, and doing many of his training runs carrying a heavy pack to strengthen his pelvis. 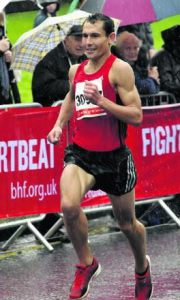 Nathan is a seasoned multi-day runner, but at seven days and 250km, this will be the longest race he has ever attempted, as well as being his first trip to sub-Saharan Africa. He knows that he’ll face tough competition if he is to become Britain’s first winner of the KAEM:

“In terms of the competitors I think Mahmut Yavuz, a Turkish competitor who won last year and finished runner up the previous year, will be pushing it on at the front. I expect competition from home nation runners too as the South Africans have the most wins in the history of the event.”

Nathan’s first glimpse of ultra running was the TV footage of the infamous Marathon de Sables that he stumbled up on when he was young, and from that point endurance running captured his imagination. It was an injury during marathon training, however, that saw him shift his attention towards running ultras, and he’s never looked back.

“Ultra running makes me a better person. There’s always something to overcome when running an ultra; the first question mark is always whether you will reach the finish line and, in one sense, everyone who achieves that is a winner every time. One of my main philosophies in a big race like this is the cliché ‘control the controllables’, so looking after myself and making sure I’m racing well and hard but also sensibly. On my day I can be competitive.”