A True Hero and Some Life Advice For Us All 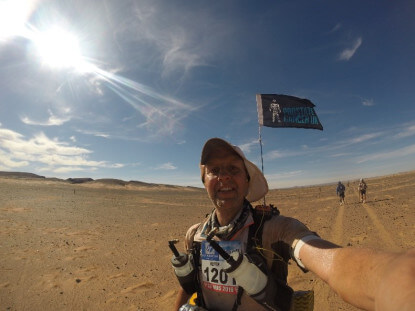 In 2015 at the Druid Challenge we were very fortunate to have a special person helping at the event. Kevin Webber was due to run, but due to his severe illness which you will read about, he was too ill to take part, but wanted to be part of the Druid as he was entered for the MDS 2016 and wanted to meet other MDS competitors.

We found out after the event that Kevin had been diagnosed with severe and potentially terminal prostate cancer. You would not believe it to have met him. The prognosis from the medical profession was that he may not make it to the MDS, but he was incredibly determined and made it to the Pilgrim in February as a competitor and then to the MDS in April.

We received the following email this week from Kevin and wanted to share it with you as his story is inspirational and his words run so deep that we could all learn from it.

We are hoping to persuade Kevin to speak at the Druid Challenge in November this year, and you will see he is raising money for prostate cancer UK, if you would like to donate please follow this link https://www.justgiving.com/Kevin-Webber4

Please take a deep breath before reading on.

No idea if you are interested but I just thought I would let you know that I completed the MDS and below is a bit about my experiences.

I wanted to thank you both for letting me run Pilgrims and let me do some checkpoint stuff at Druids, you will never understand how much being included meant to me at the time and I have such great memories.

So Its three weeks since my return from the desert, what an awesome, spellbinding place it is . The week was an experience of the highest highs and the lowest lows almost every day.

The camaraderie amongst all 1200 competitors was amazing, everyone wanted everyone to finish, on the long day the whole camp got to their feet to cheer in the final few finishers who had been on their feet for over 32 hours. That said, I cant imagine what the Yukon was like for you Neil as I guess you were pretty much on your own the whole time?

I made a few mistakes in kit selection and training but generally I was pretty good, certainly the extra weight of a small stove and proper food at night was a good choice as the rest of my tent had a diet of nuts, granola and custard powder all week , there was a certain amount of food envy every night when I cooked up chicken curry, spaghetti Bolognese, sweet and sour chicken etc!

Bizarrely being injured before made me walk more Pilgrims than I intended and that really put me in good stead for the MDS as it is more of a walk than a run unless you are elite. I did manage to come 562nd which I think is pretty good considering my circumstances.

The running/walking was a variety of 10 mile salt flats, mountains that you needed ropes to pull yourself up, endless miles of sand dunes with a sudden oasis, uneven rocky river beds amongst other surfaces. The wind was over 60mph at times and mostly in our faces kicking up sandstorms for much of the first three days, most days the temperatures was over 40c in the shade of which there wasn’t any!

The tent I was in had a great team of 8 who will be friends forever having shared such an experience although I seem to have come out best on the injury front as between the other seven members they had:-

However we all finished which was so important to everyone as without it there is no medal and that would I think mentally hang over anyone who did not make it all forever.

I learnt so much more about what is important when I was away, not in a massive life changing way but certainly in a way which has made me look at many things differently, hopefully for the better, I certainly feel amazing and my will to fight on has never been stronger. This was only added to when I saw some writing on the pavement last week in Trafalgar Square, it said :-

I guess that revelation for me was 18 months ago, I do hope that you all realise what I now know and that it does not take something shocking for you to discover what is important. I am sure many of you are already there but if not its time to take control of what you can (which is most things when you try).

There were many inspirational stories out there. I met a soldier who had lost both his legs in an IED explosion and was walking on prosthetic legs. He only made it to day 4 before the sores and blisters he had meant that the medics pulled him out of the race. Another man had just had stomach surgery having had stomach cancer, he managed to finish. The prostate cancer flag that I carried the whole way attracted many people who would come up to me and tell me they were running for their brother/father/uncle/friend who had died or had prostate cancer. A friend of mine was pulled out as she was so hot she started shivering as her bodily functions started to shut down. What was obvious to anyone there was the desire from so many to prove that you can do things despite everything and try to give something back was everywhere, those that dropped out never did so of their own choice.

I ran this race for many reasons, it was my only bucket list item, I wanted to prove to myself I could do it despite everything, I wanted to be “used” by PCuk as an example that you never have to give up to hopefully inspire others to fight on and of course raise funds to help raise awareness and find a cure. Those thoughts all at one time or another kept me going when it felt impossibly hard but have created the best memories for me.

Attached is a “selfie” I took whilst running one day not the best picture but captures a bit of everything for me. The desert is an interesting place where everything is hard, simple and beautiful all at the same time.

On my return to the UK my wonderful wife had arranged a surprise gathering outside of my house of loads of my friends, I remain so amazed that so many people have put so much money and effort into my cause and me. To cap it all she then said that I should run the race again next year as it has been so good for me mentally to have a medium term focus for fitness, diet and distraction from part of my reality. Needless to say I have signed up again for 7th April 2017!!!! (only 48 weeks to go!!). I have therefore entered Druids and Pilgrims again using your MDS package, hopefully I will run(walk) both this time but if I cant I will be a willing volunteer again if required!

I could bore you all with stories for a long time so I had better stop but I have saved the biggest thank you and mention to last which is you for what you have done by allowing me to be part of your two events . I still get emotional just thinking about the difference your support has made to me which enabled me to do the MDS and therefore raise funds for Prostate Cancer UK. I have raised over £30,000 in the last two years and that pays for a lot of research. I am organising a golf day at the moment with a good friend to raise more funds and awareness, I will keep doing what I can until I cant any more..

Thanks again and until hopefully Druids, take care.