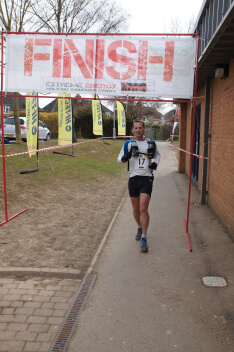 I was looking forward to this.  I’d never been to the Cotswolds before, except for a day on the lash with various drinking and gambling reprobates at Cheltenham Festival, which is more of a Guinness and lager marathon than an ultra. People who I had spoken to had told me how pretty the Cotswolds were, with its picturesque villages and rolling hills.

So, despite a long week at work, I wasn’t too bothered about the 5.15am alarm call on Saturday morning to get to Paddington station in time to make the main runners 9am start.  I’d considered setting off at 10.00 with the ‘elite runners’ but was concerned I’d not be able to keep up with any of the group and would end up doing a lot of the first day’s route in isolation.   I don’t fret too much about navigation and I don’t freak out when I go wrong or get lost, but I like to have some company along the way.  I don’t really like chatting on the run, but I do like to see other runners in front of me.   It’s comforting to know that if you do get lost, others will be in the same boat.

The weather on Saturday morning and throughout the rest of the day was beautiful – cold, with clear blue skies.  Perfect running weather.

I’d conned my mate Coops (Martin Cooper) and his wife Pam into entering the race.  They had driven to the start and got there just before me.  It was great to catch up.  I asked Coops to listen to Neil and Steve’s race briefing on my behalf while I went for a much-needed number 2.  I can never go on trains and certainly not First Great Western.

The mass start set off on time and Coops, Pam and I headed off jauntily at a decent pace.  There was a group of about 4 or 5 runners just ahead of us, who sped off in to the distance. We were happy to let them go as we led out the main pack.  Then, after about 2 miles, we were called back by a guy who was frantically whistling at us and the runners just behind us to let us know we’d missed a left hand turn and were heading in the wrong direction.  Thankfully, we heard him and jogged back the 100 yards or so to get back on track.   I still have no idea what happened to the small group in front of us. When did they realise they’d gone wrong? How did they get back on track? How much extra mileage did they do?

Coops and Pam then dropped back a bit so I ran to the first checkpoint by myself.  After CP1 I met a runner from Shropshire called Kate.  She was here for the weekend with a couple of friends, one was setting off at the later start.   We ran at the same pace to CP2 with another guy, with a yellow buff, who then left us for dead by not even stopping at the checkpoint.  Soon after CP2, we missed another turn-off but thankfully Kate was wearing a Garmin with the route programmed in to it so we were able to retrace our steps up the muddy hill to get back to where we’d missed the right hand turn.

Shortly afterwards we were joined by Kate’s friend Emily, who had started at the 9.15am start and had charged her way through the field.  The three of us ran for a while together but I pulled away slightly, having got a good head of steam on a long downhill and managed to keep a slow run going on the climb.

I ran the rest of the route on my own, catching up a couple of other runners along the way.  As we made the final ascent and traverse over Cleve Hill, Emily caught me up again.  We ran the zigzag downhill more or less together down to the finish.   Just before the run in to Bishop’s Cleve, the lead elite runner, James, overtook me, arriving at the finish a couple of minutes ahead of me (oh, and the extra hour).   I was quite chuffed with this as, at the Pilgrims, the lead bloke, Danny Kendall, overtook me after just 16 miles (which equated to 3 hours of my running and just 2 of his!).

I was pleased that I’d finished strongly.  A few coffees and pieces of cake down, I was feeling fine.  Not long later, Coops and Pam arrived.  They looked in good shape too – obviously hadn’t tried hard enough – though Coops was chuntering about a group of 3 or 4 runners that had cut out the corners on the last descent. “Doesn’t sit comfortably” he kept saying for the next 30 minutes or so.

I guess our fellow competitors had similar (“not sitting comfortably”) feelings about our decision to book a hotel rather than kip on the school sports hall floor.   Anna, recalling I’d got previous in this regard, pointed accusingly at me calling me a “floor dodger” as our taxi arrived to take us to The Rising Sun!

The rest of the afternoon was very pleasant.  We watched The Grand National in the bar over a shandy before getting a decent shower, rest, then down to the restaurant for dinner – an Ultimate Burger, chips, chocolate brownie and red wine.  Sublime.  Apart from an enormous dog, which bore a close resemblance to Boyce’s dog Duke in Only Fools and Horses, being sat at the table next to us, it was a perfect evening.

After a very quick breakfast of toast and muffins and coffee, we got a cab back to the school to set off with the main runners’ start at 8.00am.  Neil had me down as 5th overall after Day 1 so had put me in the ‘elite’ start.   He kindly allowed me to change to the middle start.   I don’t regard myself as a fast runner and so don’t feel comfortable setting off in the third wave.  Also, I felt I’d put a lot into the first day and didn’t have much left in the tank for Day 2.

So, as we set off, one guy went ahead on his own.  He hadn’t raced on Day 1 so I considered him as doing a different race altogether.  I’m a reasonable hill climber so as Day 2 started with a long climb back up Cleve Hill I led the rest of the pack.  Apart from the solo bloke, I led to CP1 and kept going.  However, soon after the checkpoint, I made a navigational cock-up.  One of the CW signs I thought was ambiguous – the fingerpost could have been pointing towards one side of the field or the other.  50/50.  Naturally I chose the wrong one.  When I checked with a dog walker whether I was on the Cotswold Way and he told me that I wasn’t, I think I’d probably run an extra half a mile, so in total the diversion cost me about a mile.  By this time 5 runners had overtaken me – Lee running on his own, Grant and Martin running as a team and Lynden and Kerry also running together.

I worked hard to get back to this group.  We arrived at CP3 roughly at the same time and then ran, albeit sporadically, as a group for the rest of the race, with a certain amount of yo-yoing.  As always, I made good headway on the climbs and descents; then the others would catch me up on the flat sections.

We were happy enough with the directions.  But one thing kept nagging away at me.  It said clearly on the route card at some point in the last section:  DO NOT FOLLOW THE CW SIGN.     We had no idea where this instruction referred to.  We kept just following the CW signs – on and on – through woods, over hills, up to trig points, irritating U-turns and round and round.  We then resorted to asking everyone we saw whereabouts Stroud was; were we in the right direction and was it close.

The worst possible scenario kept haunting me.  Would we have to retrace our steps – about an extra 5 miles?!  This was too much to bear.  On the other hand, there was a risk that we would overshoot Stroud and keep going to Bath!

Then, a huge relief.   Amidst the paranoia and despair, I kept running along with Kerry and Lynden, then out of nowhere, Kerry’s young family and husband appeared on the trail, yelping shouts of encouragement like excitable puppies.  I think I was as pleased to see them as she was!  One of her children said we were very close to the end. 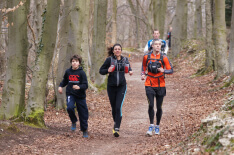 Sure enough, just down the hill, we saw a big XNRG sign directing us to the road where the yellow paint signs pointed us through the town to the finish – about another half a mile.  I was so lifted by the reality of not having got lost, I managed a strong finish to make it to the end just ahead of Kerry and Lynden.  The lads came in a few minutes later.

After some coffee and cake refuelling, I saw Coops and Pam finish.  We had a chat in the canteen area, then I leapt on the first minibus to Stroud station to head back to Paddington.

Coops and Pam were on the other minibus taking them back to their car at Chipping Campden so had to wait a while longer.  What was a hugely unexpected bonus, was a text from Coops saying that I’d finished 3rd Male and 4th overall and that he had picked up my trophy on my behalf at the prize giving ceremony.

This has certainly not gone to my head.  I’m very much aware that this was not a “stacked” field.  Many of Neil’s faster runners from his more established races such as the Pilgrims had not turned up to this first CW Challenge.  Nonetheless, it is a real motivational boost for me to have won my first ever running trophy.

Thanks to Neil and his team for another brilliantly organised event.  Congratulations to James and Emily for winning their respective races.  The route was another corking one – great views and plenty of hills.  The XNRG crew were, as ever, helpful, encouraging and enthusiastic.  All in all I had a fantastic weekend of top trail running, excellent company with close mates and I met some really friendly folk.  There were lots of people there who are preparing for the UTMB or its smaller variants so, to those people, good luck with your training and I hope to see you out in Chamonix.  And best of luck to Kerry, whose lovely family gave me a massive boost at a time when I really needed it and who, herself, is soon to be taking on an ultra in the Amazonian jungle!

Next postJoey’s Marathon Des Sables 2013
Previous postI could see for miles and miles…………….
View all posts